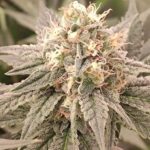 It’s a hybrid from their Sour Apple Runtz clone reversal line known for its insane THC production. Bringing the Sour Apple Runtz’s knock-out effects to just about everything it touches.

The Pink Champagne Bx1 brings her uniquely fragranced terpene profile to the table that blends with the Sour Apple Runtz. Ideally to create an unusual musky blend balanced perfectly by a gaseous yet decadent cake/baked-goods-like terpene profile. London Velvet Cake puts out beautiful, dense purple flowers. The flavour is so smooth & creamy that the name Velvet cake was an obvious choice. Few strains of cannabis have as smooth & relaxing smoke as the London Velvet Cake. Growers can expect that they’ll find a range of heights across a canopy of London Velvet Cake, with various plant sizes being found across the different phenos. Ranging from small to medium to large. The estimated flowering time of the London Velvet Cake is 8.5 to 9 weeks in total.

Sour Apple Runtz is a hybrid of the Runtz cut pollinated with the reversal of Lumpy’s cut of the Apple Fritter. It’s known for its crazy THC production. Sour Apple Runtz have insane THC production to most of the progeny, making it a great choice for extraction. The creamy Runtz notes dominate.

There are no reviews yet.